Mamata Banerjee has always repudiated the brute might of the CPI(M). Will her fire survive the temptations of power at the Centre, wonders Shoma Chaudhury

Mamata Banerjee has always repudiated the brute might of the CPI(M). Will her fire survive the temptations of power at the Centre, wonders Shoma Chaudhury 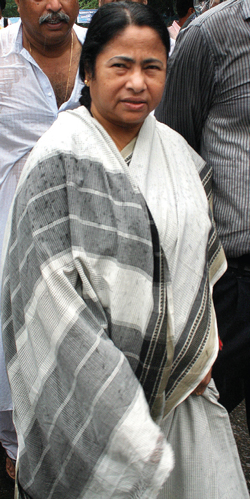 SHE HAS offered to kill herself with a black shawl in front of adoring crowds. She has been beaten brutally by her opponents. She has stormed out of Parliament. Squatted in its well. She has pulled fellow parliamentarians’ collars and flung letters at Speakers. She has supped with all parties, but married and divorced them at her will — now extending support, now withdrawing it, occasionally suspending it temporarily.

Mamata Banerjee is not necessarily the general you want when you go into war. She is equal parts courage, principle, opportunism and pure whimsy. But since her days as a student leader and her hyper-theatrical life since, there has been one constant in Mamata’s life: A repudiation of the brute might of the CPI(M). Yet, now that her moment has come, now that the TMC-led alliance with Congress has won 26 seats, reducing the Left Front to 15, like some ancient Vedic formulation, the success and failure of this historic moment is written into Mamata’s own DNA.

Will she be able to hold the alliance together? Will she be able to eschew the temptations of power at the Centre and focus on consolidating her victory in the state instead? Has her exposure to the protracted people’s movements of Singur and Nandigram matured her vision and steadied her drive for power? On the ground, people don’t care about these questions. For them, she is ‘Didi’ — the diminutive woman in the crumpled sari who is their fierce bulwark against the terror of the CPI(M). But many of her newly-converted admirers in the Bengali middle class insist there is a shift. Theatre person Kaushik Sen (who used to be a staunch CPI(M) activist) says, “Mamata seems to have changed completely. She has shown a lot of respect to the Congress and to intellectuals and people’s leaders in the movement. She has been restrained after the victory. She has not taken out any celebratory rally, she has not retaliated against the foul-mouthed abuse of CPI(M) leaders.”

Shuvaprasanna, eminent artist and a key architect of the ‘Porivorton Chai’ (We want change) campaign that fired Kolkata’s imagination pre-election, says, “She is honest, that is what matters most in these dark times.” But Medha Patkar is more circumspect. “She has occupied the non-Left Front space in the state, but we will have to wait and watch where it all goes. She will find it difficult to take the stands she has taken in this revolutionary land into the centrist Congress position.”

Patkar is right to be circumspect. After the initial pause, Mamata seems to have caved in to her genetic pattern. On the first day, she announced grandly that she would not jostle for ministerial berths; two days later she was in Delhi elbowing for seven. She is also starting to demand the dismissal of the Left Front government, though two years remain for the next assembly election. Her alliance with the Congress has been key to her victory; but she is already showing the first signs of hubris.

It will be a real travesty if Mamata reduces the incandescent mood in Bengal into political caricature because this is not her war to lose. Though she has been its most strident critic for two decades and its only consistent political opponent, the defeat of the Left Front — some would say its “self-destruct” — has not really been engineered by her. Instead, it has been built on the backs of countless anonymous men and women — farmers, tribals, artists, intellectuals, teachers, students and grassroot leaders.

The nation is watching Bengal not because one party has been ousted by another. But because the issues are big and serious. The resistance in Singur and Nandigram stemmed the indiscriminate rash of SEZs the UPA had unleashed upon the country. It has forced essential conversations about judicious land distribution and the imperative of building minimum consensus in a democracy. The euphoria in Bengal is about deep political awakening. Unfortunately, Mamata Banerjee is well poised to mistake it for mere political opportunity.

‘Farmers should sell their land; invest in stocks’

Manmohan Singh and the Silence of the Lamb

A scam-ridden decade in office has tarred the clean image of Manmohan Singh. But is the PM a victim...