It has been a year of seething people’s movements and unprecedented direct action on the street. What does this portend? 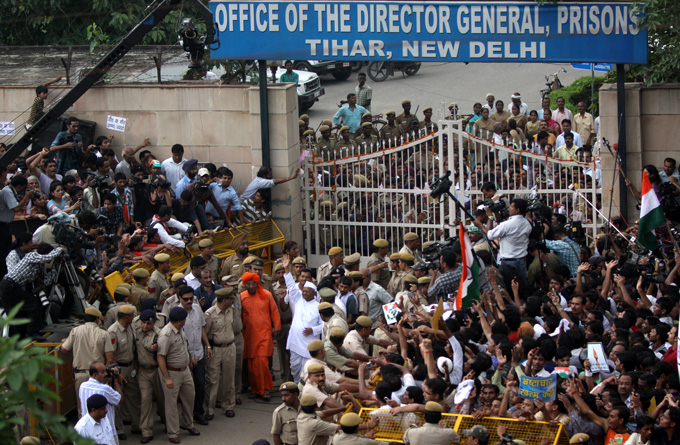 ACROSS THE globe, this year has belonged triumphantly to a surprise protagonist: the street. Young, many-tongued, many-limbed, it has illumined a new idea of the possible and risen with contagious urgency to grab unimagined freedoms from despot regimes. And blow smoke off the ills of democracies.

Stretching from America, Europe, Africa, the Arab world, and all the way up to Russia and China, everywhere the underlying cry has been the same: a demand for a new social contract. A demand for dignity, freedom, justice and equal opportunity. A rejection of the status quo.

The voice of the street is not new to history. Nor are the frustrations it is voicing. What is new is the armour it has acquired: its virtual counterpart, the social media. Anonymous, uncontrollable, de-centred, the street no longer needs leaders. It draws on a disembodied spirit of brotherhood that can viral at the speed of light. One country’s revolution has become another’s lightning rod. Grievance can catch fire at any moment now.

This creative churn — and the street’s new capacity to make common cause across geographical boundaries — has thrown up fascinating challenges for the decade ahead: can corporations and big finance reinvent themselves more ethically? Can democracies deepen and become more responsive? Can newly born societies fulfil their potential or will they — inevitably — replicate the ruts of the old?

If 2011 was the year of passionate action, 2012 will have to be a year of courageous, clear-eyed thinking. What is the new social order the human animal craves? What shape can it take? No one should imagine things can just slip back to the old ways as the dust settles. That would be foolhardy. The street has risen and entered the networks: its agile new voice will be tough to silence.

LIKE THE world, India too has had a year driven by the complex messages of the street. At one level, these are easy to decode. The protests at Jaitapur and Koodankulam, the desperate stands at Bhatta-Parsaul, Srikakulam and POSCO, the determined agitation for Telangana, the slap for Sharad Pawar — these express the old tested ways of democracy. Citizens frustrated — or endangered — by the blindness of government or its unjust policies have always erupted on the street to make their grievance heard, to push power to do better. To demand change in some general principles of how land should be acquired or industry set up or governance improved.

But the Jan Lokpal movement is of a different tenor. It is armed with the new ammunition the street has never earlier possessed: the social media and 24×7 electronic media. Driven at least in part by images on TV and a fashionable hunger to be a part of the romance sweeping the globe, the Lokpal movement is fuelled by swathes of middle-class folk who might never have dreamt of hitting the street, and who, perhaps, will never travel to India’s interiors even now to stand in solidarity for the rights of others’ livelihood. But regardless of what first brought them there, the thirst for change has now taken root. The old acceptance of corruption as an endemic way of life has been shattered. The ruling government is disastrously mistaken not to cede some real and radical ground on how to curb it.

But the Lokpal movement also comes with its own riddles. Unlike the other street movements across the globe this year, this one is not inchoate and leaderless nor is it just expressing frustration. It claims it has the perfect formula to eradicate it. It speaks in emotive polarities — “the people are good, politicians are bad” — to rouse numbers on the street, but what it really seeks to do is push through a sweeping legislation designed by a few. Its danger is it does not claim to speak — as other street movements accurately do — for the affected villages of POSCO or the displaced of Narmada. Rather, it’s assumed for itself the universal “voice of the people” (triggering thorny questions about what constitutes representation). Also, it is unmistakably driven by a great and cleansing intention, but troublingly, it does not seek to change the nature of power, merely its location.

But there will be time enough to sift through those riddles. The most crucial message the street has crystallised for India this year is that there is a fundamental crisis of democracy brewing in our country. Long years of misuse have hollowed out the idea of electoral representation and leached it of moral legitimacy. The Jan Lokpal movement is symptomatic of that crisis. Yet, for a plural and cacophonous society like India, there can be no substitute for parliamentary democracy — messy, slow and dialogic as it may be. 2012, therefore, has to be a year of chastened humility and renewal for our elected leaders. If they are to assert their right to be the true representatives of the ‘people’, they have to intuit the non-negotiable principles the street is demanding: a new spirit of accountability and transparency. Whatever design it comes in.

Can the media bail itself out in time?

The Jindal-Zee scandal is the latest warning sign for India’s troubled Fourth Estate. Is there anybody willing to clean...

Think. And Be Damned

If the capacity for laughter is a society’s health card, the cross-party call for a cartoon disarmament in textbooks...